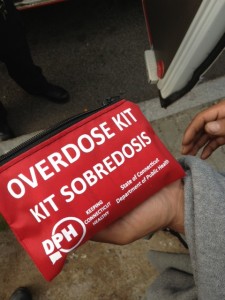 I was on Park Street last week headed into El Mercado to get some pernil (roast pork), yucca and tostones for lunch when a gentleman came up to me and showed me his overdose kit.  He said he’d gotten it at the local needle exchange program.  He said he had already used it once when one of his buddies ODed and it worked great (though his friend was initially a little pissed at him, but later came to understand when the friend smacked him and said, “But you weren’t breathing, bro!”.  The kit contained two 2 mg prefilled Narcan syringes and one atomizer.

My EMT partner Jerry just stood there shaking his head.  He didn’t understand how some dude on Park Street could give Narcan to his overdosed buddy, but as an EMT Jerry couldn’t give it.  In Connecticut basic EMTs can give intranasal Narcan, but only if their service is approved for BLS Narcan by their sponsor hospital.  That hasn’t happened yet for our service so no Narcan for Jerry.
And I stood there shaking my head because while as a paramedic I can clearly give Narcan, we are having a severe Narcan shortage at work.  Our supply shelves are bare.  I, at that time, had only 4 mgs of Narcan in my bag, and that was only because I was able to get the second 2 mg dose by raiding another car that had a spare Narcan on the shelves.  I had none on my shelves.
I have been working the streets for 20 years and other than a few brief periods when a particularly strong heroin hit the city, causing seasoned addicts to overdose, I have rarely seen as much heroin on the streets as there is today.  Rarely a week goes by that I don’t do at least one overdose.
I am all for everyone being able to give Narcan (when appropriate).  I think it is great that the street dude was able to save his friend.  I would like to see the police be able to give Narcan instead of directing traffic around the car with the blue driver passed out at the wheel at the stoplight.  I would like to  see fire be able to give it instead of having to bag the patient until we show up or perhaps to stand around while the unresponsive patient’s respirations decline to near zero  (I have seen both excellent airway management by the fire department and less excellent airway management). And I would like my partner Jerry to be able to give Narcan on the days when he works with a BLS partner and instead of giving Narcan has to bag the patient all the way to the hospital because there are no medics available.
But to be able to give it, we have to have it.  Which brings me back to the guy with the overdose kit.  The reason he stopped me in the first place was he was curious how much each vial of narcan was worth.  I told him I thought it was about sixty dollars a syringe.  “Yeah?” he said, “That’s what somebody else told me.  That’s a lot.”
I wondered why he was so curious.  Was he pleased that the state not only was willing to trust him with life-saving medicine, but with valuable life-saving medicine?  Or was he maybe looking to sell it?
I had a vision then of ambulances lined up outside the needle exchange center where another type of exchange took place.  “I’ll give you forty bucks for your kit.”  “Throw in your roast pork and a pack of smokes and it’s a deal.”