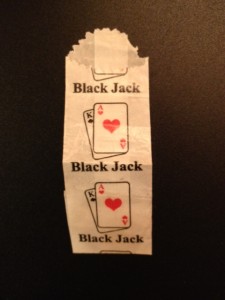 Black Jack, Call of Duty, Focus, Adidas, El Chapo, Worldstar, Chief, Headphones(just a design), Compton, Avengers, Money Bags, Avatar. We also found one with a weird red design and a few that were indistinguishable. Only Black Jack was multi-colored, several had fancy designs, others just a stamped name. It had rained hard that morning, so the bags were damp and some muddy. There were also lots of unlabeled bags. We found some that were colored pink, others light blue. In some cases we found the same brand clustered together. I don’t know how long the bags had been there, some — the clustered ones were likely fresh (an addict does a quick bundle and tosses the wrappers out the car window). Some of the others could have been there for months. It was hard to go two feet without finding an empty bag of one kind or another. Some people hunt Pokemon. We hunted empty heroin bags.

Later we drove by a few other areas and within moments found more brands, including Louis Vitton.

But everywhere we went we found Black Jack.

My Addiction, Through My Eyes Self-portraits by Graham MacIndoe.
RIP Jynxies Natural Habitat
The Hidden Story of Middle-Class Heroin in Brooklyn and Beyond
Shelby Hughes Obituary