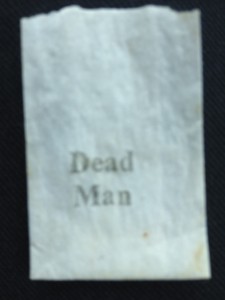 I mentioned that we had a patient this week who said she stayed away from the white powdered heroin because of her fear of Fentanyl.  Powdered Fentanyl is white and very hard to distinguish visually from white powdered heroin.
A number of years ago drug dealers started enhancing their heroin with Fentanyl. Fentanyl is stronger than heroin, so adding it was a good way to boost the reputation of their product. Deaths increased as users were hit with more potency than they expected, or in some cases, the heroin and Fentanyl were not evenly mixed and so even a user with high tolerance might die with the syringe in their arm if they got a hot spot of disproportionate Fentanyl in their buy.
The deaths and subsequent warnings of dangerous heroin only drew more users to the brands as many users sought the powerful mixtures. More dealers began adding Fentanyl to their batches. Also, while years ago, it was common practice to cut heroin to increase profits, many dealers now keep their heroin strong in order to compete with the Fentanyl brands as well an ever increasing supply.
Fentanyl can be obtained in two ways.  The low rent way to extract it from Fentanyl patches. The other way is to make it in a lab or get it from a lab. Most of the street Fentanyl in the United States now comes from labs in Mexico or China, and is smuggled into the country in the same matter as heroin.  Because it is stronger, more can more smuggled for the same potency. The prevalence of Fentanyl is increasing to such an extent that some law enforcement officials have on occasional found 100% pure Fentanyl being sold as heroin.
This week in Hartford, a SWAT team broke into a drug dealer’s home and detonated a flash grenade to stun the suspects who were known to have firearms.  The explosion aerosolized some of the Fentanyl and heroin in the apartment and 11 of the team members were hospitalized for nausea, dizziness and vomiting. This bust yielded over 50,000 bags of Fentanyl-laced heroin.
11 Hartford SWAT Officers Exposed To Heroin, Fentanyl During Drug Raid
The woman we talked to used the bag stamp system to know which brands to avoid as she was not a death seeker like many users.
Back in 1991 when Tango and Cash stamped heroin bags that were laced with Fentanyl were killing people on the streets of Hartford, the New York Times wrote about officials driving the streets using loud speakers to warn people about the deadly mixture. At the same time, the alerted junkies suddenly sought the brand out much like Super Bowl tickets or people today seek the latest I-phone.
Toxic Heroin Has Killed 12, Officials Say
While our woman friend avoids the dangerous Fentanyl mixture, others seek it. This is reflected in the branding. I found a heroin bag labeled “Dead Man,” another bag had a picture of the Grim Reaper on it and the words Strike Dead. Some bags just have a skull and crossbones on them.  This does that necessarily mean that those brands are the baddest of the bad.  It could just be marketing.  A user who trusts their regular dealer will hopefully learn what brand will fit their needs.

Another problem with Fentanyl for the user (besides higher risk of death) is that it does not last as long as heroin.  Users need to fix again sooner and end up having to buy more. I suppose the dealers are willing to lose a few clients to overdose to gain the added volume from other customers.  Talk about business ethics.
The picture in the paper of the Hartford bust and the 50,000 bags of heroin all laid out on a table seems like a lot, but if a user had a two bundle a day habit – 20 bags, 50,000 is a year’s supply for just 7 addicts.  I don’t think the users in Hartford will have to look too far tomorrow to get their fix. Someone on Park Street will be hawking Undertaker,Six Feet Under, or Dead Man. And money will change hands.
And another 911 dispatch will go out.