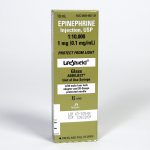 The use of epinephrine in prehospital cardiac arrest showed no difference versus placebo in determining favorable neurological outcome according to a long awaited randomized controlled study published yesterday (July 18, 2018) in the New England Medical Journal.
The trial showed epinephrine produced a higher rate of survival at 30 days than placebo, but that was accompanied by almost twice the rate of severe neurological impairment.
Over 8,000 patients were enrolled in the randomized double-blind trial conducted in the United Kingdom between December of 2014 and October 2017.
The thirty day survival rate was 3.2% in the epinephrine group versus 2.4% in the placebo group. At hospital discharge 31% of the epinephrine survivors had severe neurological impairment versus 17.8% in the placebo group.
Paramedics needed to treat 112 patients with epinephrine in order to produce one extra survivor and that survivor was much more likely to have a poor neurological outcome than a placebo survivor.
The authors of an accompanying editorial speculate that while epinephrine may increase return of spontaneous circulation, it may also “result in long-term organ dysfunction or hypoperfusion of the heart and brain.”
You can read the study and accompanying editorial at these links:
A Randomized Trial of Epinephrine in Out-of-Hospital Cardiac Arrest
Testing Epinephrine for Out-of-Hospital Cardiac Arrest

Will this result change AHA ACLS guidelines?
We will have to wait and see. The AHA has been very reluctant in the past to make changes in the ACLS cardiac arrest epinephrine recommendation despite multiple trials showing no benefit or possible harm. Perhaps they will further temper their current recommendation.
Standard-dose epinephrine (1 mg every 3 to 5 minutes) may be reasonable for patients in cardiac arrest (Class IIb, LOE B-R).
What is next?
Look for studies using a decreased dose of epinephrine or studies targeting specific rhythms.  I have always thought it odd that we use the same 1 mg dose of epinephrine for an 80 year old 100 pound woman with a cardiac history who collapsed having an MI and for the thirty-nine year old 250 pound male with an opioid overdose.
In the meantime, what does this study mean for front line paramedics?
Focus on good CPR and timely defibrillation.