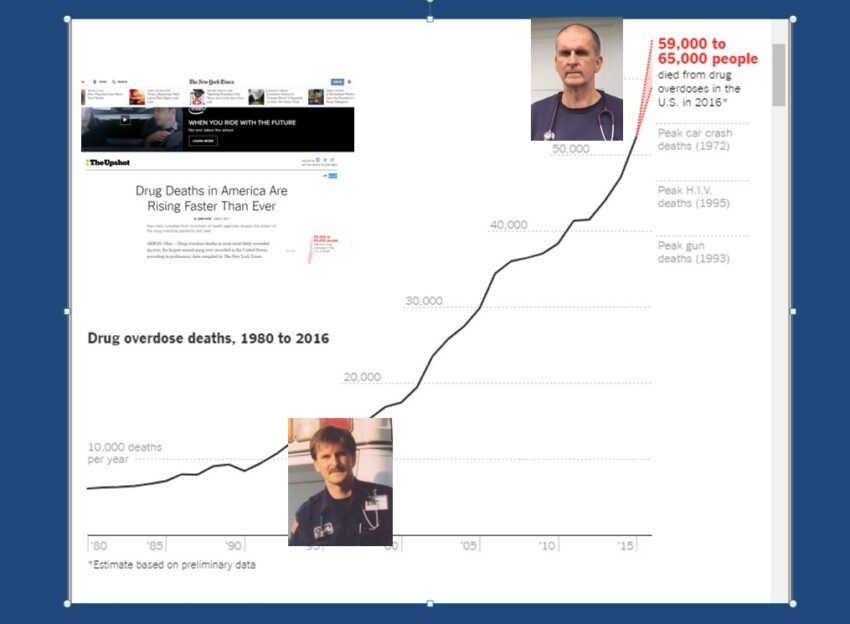 “He cut them down in droves–the corpse fires burned on, night and day, no end in sight.” – The Illiad -Homer (Robert Fagles translation).

In 2017, for a powerpoint presentation on the opioid epidemic, I made a slide that showed a graph of annual nationwide fatal ODs (about 15,000) from when I started as a paramedic in Hartford in 1995 to 2016, when the number had reached 65,000 a year.  I put a picture of myself at each stage.  Now four years later the annual death toll has reached 100,000.

I went from being a medic who told my patients to just say no to drugs or they would end up dead or in jail to being an advocate for harm reduction (community naloxone, needle exchange, safe consumption sites) to now being adamant that the only way out of this is to end the war on drugs through decriminalization and regulation of a safe medicinal supply of opioids.  Clearly what we have been doing is not working and the problem continues to get worse.

Nearly everyone recognizes that this is a public health crisis and that addiction is a medical disease.  Law enforcement officials even routinely say, “We can’t arrest ourselves of of this problem.”

Yet, we force people to obtain their drugs from dealers who sell an unregulated toxic product where the user can never be sure of the dose, or even what chemicals are in the product.  Stigma and law chase users into the shadows where they use alone and they die poisoned by our failed drug policy.

I stand over them, running my six second strip of asystole and calling the time.

No end in sight.