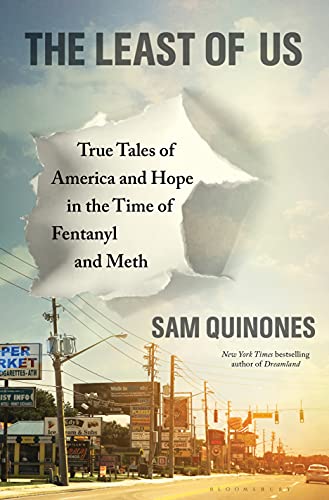 This week I have been reading/listening to Sam Quinones new book “The Least of Us”  about the changes in the opioid epidemic caused by the shift from heroin to fentanyl and the shift from ephedrine-based methamphetamine to a more dangerous type he calls P2P meth.  A federal drug agent told me a few years ago that drugs go in historic cycles from sedatives to stimulants and back.  We have been expecting our opioid/sedative cycle to switch to stimulants here in Connecticut, but it hasn’t happened in a significant way yet as it appears to be happening in other states.  The crazy meth that Quinones writes about instead of turning people into extroverts seems to turn them inward and antisocial, banging their heads against walls.  Due to the idiosyncrasies of the drug market, Connecticut fortunately has been spared this so far.  We have always seen very little meth in our state.  The stimulant used here is cocaine, which comes through established drug routes run by Puerto Ricans and Dominicans.  We have been experiencing some uptick in cocaine deaths and some problems with fentanyl-contaminated cocaine.  In his book, Quinones talks about dealers in the Midwest deliberately lacing cocaine with fentanyl to better addict their clients.  Most dealers in Connecticut sell fentanyl and cocaine, but they sell them separately.  Occasionally, likely due to poor mixing standards at the local level, there is some cross contamination.  I don’t believe many dealers here would deliberately add fentanyl to their cocaine just to try to addict their patients. Cocaine is addictive enough on its own, plus with so many dealers around, users have options if they feel betrayed by a dealer selling them laced product.

This week, a paper I co-wrote was published by Public Health Reports about a fentanyl-contaminated batch of crack cocaine that killed 6 people in Hartford in June of 2019.

Using Surveillance With Near–Real-Time Alerts During a Cluster of Overdoses From Fentanyl-Contaminated Crack Cocaine, Connecticut, June 2019

Episodes like this do not make users flock to a dealer.  People who want fentanyl may want a stronger batch of fentanyl, but people who want cocaine or crack only do not want cocaine or crack with fentanyl. People who want both, will buy both separately, which is easy enough as most dealers here sell both. We are currently at work on a new paper about fentanyl-contaminated cocaine in our state based on data from our SWORD EMS reports of people overdosing and requiring naloxone, despite claiming to have only used cocaine, and lab-tested drug seizure data. We believe the most plausible explanation for these overdoses is cross-contamination at the local level.  By cross-contamination, we mean failure to properly clean grinders, sifters, scales, tables, trays and other instruments and areas where the drugs are packaged. Our harm reductionists encourage anyone using cocaine to be wary when they buy from dealers who also sell fentanyl, and to always have naloxone on hand and never use alone.

Yesterday I worked the city fly car, and I was hoping to finish Quinones book. But I kept getting interrupted by calls for overdoses.  While I did one heroin/fentanyl overdose, most of the ODs were not for opioids or cocaine or meth, but PCP.  PCP, a dissociative hallucinogenic, is quite popular in Connecticut.  It used to be that most of our PCP overdoses were for violent patients taking their clothes off (due to the heat it produces) and running naked through the streets.  It was standard procedure to sedate most of these patients because they were so violent.  Not this year — the PCP on the street is the opposite of what it used to be and the opposite of the crazy meth that other states and cities are dealing with.  This PCP makes the users very docile and introverted.  I typically arrive before the ambulance.  It seems I spent my day standing next to PCP patients, letting them dance to their own inner beats until the ambulance arrives, when we interrupt their reverie briefly to load them into the ambulance, then slowly drive them to the hospital where they lay quite contently on their beds with no need for restraint until the drug wears off. They love their PCP here. Bless them if it brings happiness to their lives. I hope it doesn’t damage their brains too badly.

I am hoping to finish Quinones’ book today.  He is a great writer and the book is fascinating.  I also highly recommend his first work Dreamland about the spread of black tar heroin from Mexico across much of the United States, largely in the West and Midwest. Quinones also does a great job talking about people’s struggles to break through the cycle of drug use, offering some hope in the face of the ever-deadly epidemic of drug overdose that is likely to soon exceed 100,000 American fatalities a year.

I’d love to see Hulu or some network like Netflix make a movie from Quinones’s work similar to what Hulu did with Beth Macy’s Dopesick.