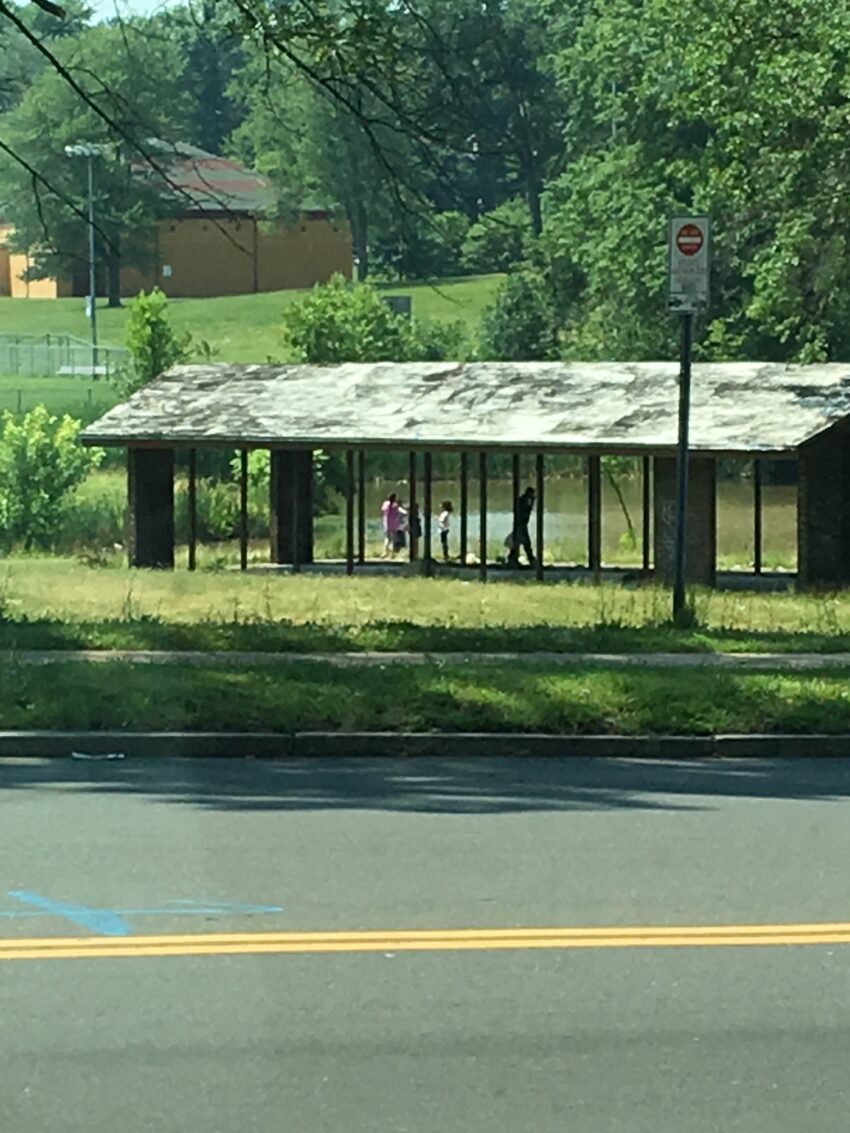 I was walking in Pope Park, my EMS radio on my belt, and the ambulance idling not a minute away, I stopped by the pond where there is a open air building with a concrete floor where users often sit against the walls and shoot up, out of site of traffic.  I go down there sometimes to look at the drug wrappers, checking for new brands.  Whenever users come by, I always hold my hands up in a no worries sign and pass some talk and then leave them their space. Sometimes, if it is real hot, I might go back to the ambulance and return with some cold water I keep in a cooler in the back.  Sometimes in the winter I carry a Dunkin’ Doughnuts Box of Jo to deliver coffee.

One day a few years ago, two users approached rather rapidly.

“Hey, what’s up?” one of the men said, acknowledging me.

“Nothing, just enjoying the day. You staying safe?”

“Yeah, we’re glad to have you around. You’re like our security guard.” The second young man looked concerned to see a tall person in uniform, but the other guy reassured him: “He’s cool; no worries, man.”

Without another word, they both got down on the cement, one sitting and the other kneeling, and they took out a syringe and a bottle-cap-sized cooker. I watched as one man ripped open two bags of heroin and dropped their contents into the cooker and squirted in some saline from a blue vial. I was fascinated by what I was witnessing but was uncertain about the ethics of my standing in uniform next to two people using illegal drugs. I said, “Be safe. I’ll be up in the ambulance. Call me if you need me.”

“Go on and do it already,” the  young man said to the other. He had already tied a USB cord around his arm and was holding his arm out for his friend to inject him.

I sat in the ambulance and watched them from fifty yards away. One’s head drops forward while the other stood, stretched, and looked off across the pond at birds flying out of the marsh grass, perhaps after being startled by a predator. A few minutes later he helped his buddy up, and they threw their backpacks over their shoulders and marched back across the field.

People tell me they like to know I am around because I can protect them if something goes wrong.  I was hailed once into the bushes for a woman overdosing, and while she was merely nodding off and did not require naloxone, we struck up a conversation that overtime as I encounter more often became a friendship that continues to this day.

On many occasions now, I have sat in the ambulance or fly car and watched people shoot up.  I would much rather have that than having them use behind the dumpster out of my sight, and overdose and die because no one found them until it was too late.

My harm reduction hero, Mark Jenkins runs a drop in center on Albany Avenue.  He lets users use his bathroom.  He designed the door so it opens out, instead of in.  He has someone sit outside the door and keep track of the time.  After three minutes, they knock and say, “Are you okay?” People have overdosed in his bathroom, but no one has died.  His staff administers naloxone and calls 911.  They assure the patient that I will take good care of them on the way to the hospital.  They call whoever the patient needs called.  There is no judging, only human kindness.

I am sixty-three years old, and here’s what I think about life.

We need to love people.  We need to care about them as human beings.  Harm reduction says you should meet people where they are.  To me that means you love people for who they are.

I was interviewed this week about Connecticut’s EMS Opioid Surveillance Program.  I was asked a question about New York City opening the nation’s first safe injection site.

Here’s what I said:

Dan: “Another big topic lately has been safe injection sites, they’re called. New York City is the first to have one of these locations where people can take illegal drugs under supervision. What’s the thinking behind this? And do you think we’ll see more of these sites in the future?”

Canning: “I think that they’re a great idea. The thinking is, is that as I said, people are dying, because stigma and law drive them into the shadows where they use alone, and no one can find them in time. By going into one of these safe injection sites, they get to talk with people who care about them with the health professionals and recovery experts. And, you know, if they’re ready for recovery, they can get help for that. If they do use an overdose, they can be saved. No one has ever died in one of these places. But they’re best for a human connection. You know, people who are dead can’t recover. And many of these people they came in, they became addicted through injury, and through prescriptions from their regular doctors, and their lives have tumbled into this horrible existence. And we need to love these people and welcome them back into our communities and treat them as human beings and offer them hope and keep them alive.”

To read more about my thoughts on safe injection sites, read chapter 23 in my book: