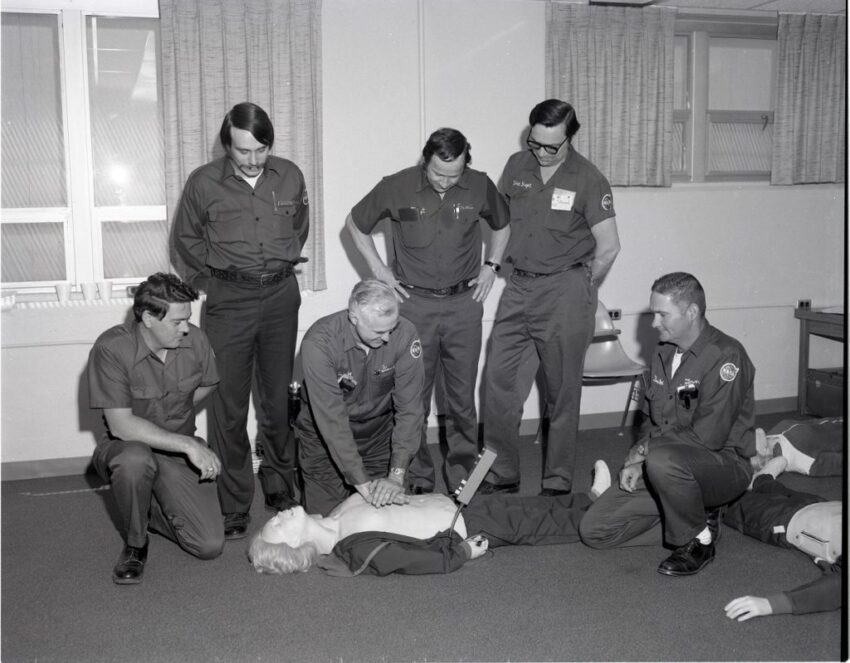 I’m recerting PALS (Pediatric Advanced Life Support), ACLS (Advanced Life Support) and CPR today in one all-day session. After this, I’ll be good for another two years. If you are in EMS, you can measure your career by how many American Heart Association recerts you have taken.  For me this is the 15th time for PALS and ACLS, the 18th time for CPR. It’s a lot of hours rehashing the same basic material.  It is pretty much universally required.  You have to maintain these three AHA certifications if you want to stay working in EMS.

When I started ACLS and PALS were nerve racking.  Not everyone passed.  Remediation and repeating stations was common. You had to study before and then do one on one sessions with ED doctors.  Now, all you do is watch videos, push on some mannequins, and take a multiple choice test that is hard to fail.

I am fortunate that our union contract requires the company to offer us the training at no cost, but still it is a day off of work.  I’m not saying knowing the subject matter isn’t important, but after 30 years and countless codes, these tedious hours watching the videos (whose content changes minimally from year to year) and pumping on mannequins could be spent better on other EMS topics.  Cardiac arrests our are bread and butter. Some suit might think its vital, but most medics believe it is a largely a waste of time. I know some hospitals have adopted a much more sensible model of short frequent practice sessions on mannequins that give feedback (compression depth/rate) and the sessions are conducted in the workplace.  That hasn’t hit EMS yet or at least it hasn’t hit my service.

The training room I am sitting in holds memories.  I can close my eyes and see old co-workers sitting here with me and laughing and telling stories about calls and other hijinks during training breaks.  This past year has been a tough one. I can think of at least six co-workers, past and present, we have lost.  All of them were here walking the earth one day and then gone the next.  All too young. Kristin Shea was one of my old regular partners.  We worked together at night over twenty-five years ago.  I wasn’t too excited when I learned she was going to be my partner, but we became close as most partners do if you work together for any length of time.  She was like a little sister to me, a sweet kid who had more than her share of hard luck.  She moved away for a number of years and then returned. She had back issues and had to quit the life.  I lost touch with her long ago.  Seeing her picture in the paper last week you could still see her vulnerable vibrancy despite fifty-one years of living.

Working EMS in the city back then seemed like a big deal to us all.  There was a gang war going on that made national headlines.  The fire department didn’t respond back then, and the police rarely came to calls unless it was a shooting or assault.  We were largely on our own.  There weren’t many medics so every night you saw a lot of action.  We worked hard (nearly unlimited overtime) and partied hard.  Girls dug guys who were paramedics.  Guys dug chicks who worked the EMS streets. We were all six feet tall and bulletproof. After thirty years the glamour has long worn off. Mortgages, kids, bills, injuries, medical problems.  For some, divorces, lonely apartments, and deterioration of all they used to be.

Many of the old EMS guard left the streets for more stable work.  I’m still out here, but only part-time now with my hospital job providing the real money and benefits.  I can’t quit the streets completely, but if I didn’t have the other job, I wonder what 70 hours of EMS a week would be doing to me. It was hard enough to work at that pace in my thirties and forties.

We are all wearing masks today for this class.  Who could have imagined that all these years ago?  This is the same room we have used for Fit testing, putting on N95s and the tall hoods and having a supervisor spray the weird smell stuff under the hood to see if we could smell it.  We learned about H1N1 in this room, as well as bird flu and Ebola.  None of them we ever took too seriously.  Decades of CMEs, protocol updates, airway training, vent training, 12-leads, OSHA, capnography, opioid crisis, sex trafficking awareness, geriatric and pediatric and OB emergencies were held in this room.  We got Flu shots here, hepatitis B shots, TB testing.  It goes on.  Union negotiations have taken place here.  I remember one negotiation late in December.  I was willing to settle, but the union rep said we needed to stay firm.  The back and forth went on for hours till the company finally caved.  They wanted to go home.  It was just a couple days before Christmas, and they had other commitments (perhaps a Christmas party to attend) so they caved.  That was one of the few battles we won over the years on that front.  Another time in this same room, we discovered a hidden microphone that they used to listen to our discussions. Some bad publicity for the company that was.

I wonder if this building full of memories will even be here thirty years from now.  Will it fall into disrepair and be demolished by man or natural disaster? Maybe climate change will wipe our world away so only giant cockroaches will roam the land. Maybe science will find a cure to all that ails us and we will continue to advance as a society. Maybe we will all be flying around on jet packs?  What will EMS be like?  Will CPR still be a thing?  Will we have some super powerful shot that recharges the cardiac arrest victims nearly instantly like narcan does for opioid induced respiratory arrest?  I can’t see the future too well, but I hope we are not still watching the same AHA videos, taking the same damn tests, and putting our hands on the same stiff mannequins.  If I had to bet on it, if I had to say something to the youngest in the class today, it would be this:  Odds are, if you continue in this glorious work, you’ll still be sitting in that same chair, in this same dreary training room, shaking your head at how time passes.  Enjoy each day. It beats being in the ground.

( above photo US National Archives)