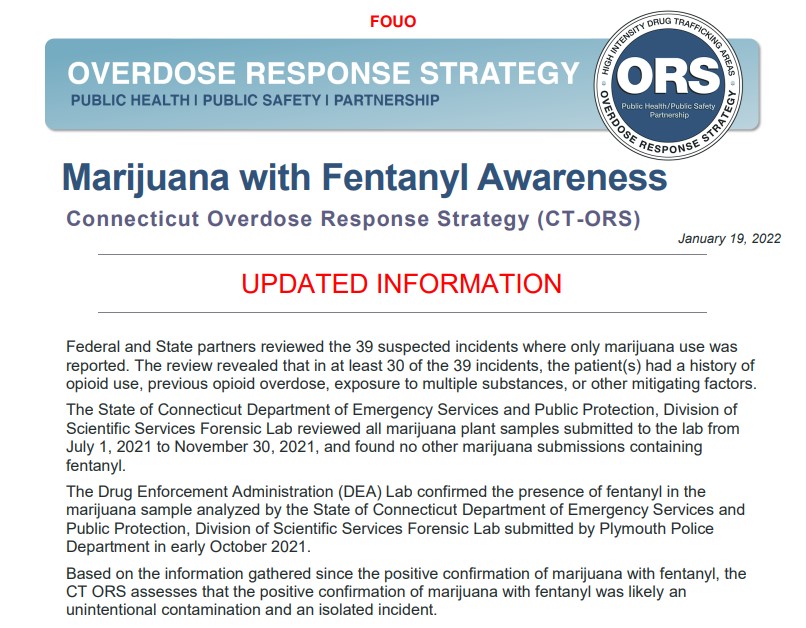 From July to November 2021, the Connecticut Poison Control Center (CPCC) received 39 reports from emergency medical service (EMS) responders of overdose patients with opioid toxidrome syndrome (depressed consciousness, apnea or agonal breathing and pinpoint pupils) who EMS resuscitated with naloxone, but who afterwards stated they only used marijuana and denied opioid use. Three of the reports came within two weeks of each other from the small town of Plymouth (population 12,243). The Connecticut state forensic laboratory tested marijuana found at one of the scenes by the Plymouth Police Department and determined it was positive for fentanyl, marijuana and Delta-9-Tetrahydrocannabinol. This was the first lab confirmed case of marijuana with fentanyl in Connecticut and possibly the first confirmed case in the United States and challenged the notion that fentanyl is not a danger in illicit marijuana.

The EMS reports were made as part of Connecticut’s unique surveillance tool, the Statewide Opioid Reporting Directive (SWORD) which requires EMS responders to report suspected opioid overdoses to the CPCC. EMS answers a series of 10 questions, provides a narrative of the event, including drugs/paraphernalia found on scene. In 2021, EMS reported over 4,896 overdoses to the CPCC.

Fentanyl is the predominant opioid in Connecticut, present in 91% of all opioid deaths in 2021.  There have been national news reports of dealers intentionally lacing marijuana with fentanyl despite contention that marijuana is a poor delivery system for fentanyl due to its low burn point.  The New York Times (Inside Fentanyl’s Mounting Death Toll: ‘This Is Poison) reported dealers, “spritzing liquid fentanyl onto baking sheets of marijuana, creating a once-rare concoction that some dealers say is increasingly requested.”  Sam Quinones, author of DreamLand and The Least of Us, wrote in an editorial, Op-Ed: How supply and demand have driven the U.S. drug crisis into the ‘synthetic era’ in the LA Times, “Fentanyl has become so commonplace that dealers now use it the way we use salt on our food. They liberally sprinkle it into anything they’re selling: cocaine, methamphetamine and, in some rare cases, marijuana.”  Here in Connecticut, Brian Foley, a former spokesman for the Hartford police department told the Hartford Courant (Fentanyl-laced pot confirmed in Connecticut for first time, caused OD in Plymouth,) that a dealer told him “dealers are spraying an aerosol form of fentanyl on large quantities of marijuana. Besides boosting the effect, the sellers also build an addiction among customers.”

On the other side of the story, however, many argue that marijuana is a poor delivery mechanism for fentanyl due to its low burn point.  Claire Zagorski wrote in Filter magazine, The Pernicious Myth of Fentanyl-Laced Cannabis, “Burning fentanyl with flame destroys it, so even if someone smoked cannabis contaminated with fentanyl, the fentanyl would not be active in the smoke.”

Here in Connecticut dealers routinely spray PCP on marijuana, so it is possible a dealer would consider spraying liquid fentanyl on marijuana, which might make the fentanyl easier to vaporize when smoked and possibly able to cause symptoms.

Some have questioned why dealers would spray an expensive drug on a less expensive drug, but here in Connecticut fentanyl is extremely cheap going for as low as $2 a bag.  It does not seem unreasonable that a small amount of fentanyl could be mixed in water and sprayed on marijuana to enhance it. Surely of the thousands of dealers, some have considered this. Whether or not it actually gives people a good opioid high is clearly less likely.

I asked one of my user friends in Hartford if she was aware of dealers spraying fentanyl on marijuana.  At the time she and her boyfriend were working for a dealer who sold fentanyl and cocaine, but not marijuana.  Both she and her boyfriend said she had heard of it, but had never encountered it.  Not exactly a confirmation. She said she had a friend who liked to sprinkle fentanyl in her marijuana blunts for the pleasant feeling it gave her.  I asked my friend to do an experiment for me.  One morning when she was dope sick, sprinkle some fentanyl on her marijuana and let me know if she got an opioid high from it (Of course I also remind her never to use alone and have naloxone on hand).  She promised she would, but every week when we meet, and I ask her about it, she has forgotten to do so. I have stopped asking,

If only a research project could be done to test these theories under scientific conditions to settle the question once and for all.  Can you experience a true opioid high and or overdose by smoking marijuana contaminated with fentanyl sprayed on it or mixed in it?

The marijuana cases represented 1.85% of the 2,052 SWORD EMS reported opioid overdoses during this time period.  Despite being unable to conclude whether these 39 suspected cases were caused by deliberate lacing, unintentional dealer cross contamination, or simply some people hiding their opioid use due to stigma and law, the laboratory confirmed fentanyl positive sample combined with the EMS reported cases led the New England High Intensity Drug Traffic Area (HIDTA) Overdose Response Strategy group to issue a situational awareness.  People using any drugs, including marijuana, purchased illicitly from dealers who traffic in fentanyl, were urged to be cautious, never use alone and to have naloxone on hand. It should be noted HIDTA is a public health/public safety partnership representing law enforcement and health policy analysts who work closely with state and local health and law enforcement departments.

The story, when it first came out, made major headlines across the country, as well as drawing comments from experts who doubted its claims.

Should We Fear Fentanyl Laced Marijuana?

Perhaps not surpassingly after the report came out, even more reports of suspected fentanyl-laced marijuana were made.  Subsequently, the state reviewed each of the 39 original reports made before the advisory.  While there was incomplete information available and only the one sample available for testing, the review found that 30 of the people who claimed to have only smoked marijuana either had a history of previous opioid overdose, a history of opioid use, exposure to multiple substances, such as cocaine, or other mitigating factors such as experiencing symptoms of opioid withdrawal after administration of the naloxone.  The state also reviewed other marijuana samples submitted to the state lab during that time period and found no other samples contaminated with fentanyl.

The one positive Plymouth sample was determined to likely be accidentally contaminated by the fentanyl.  Whether or not the person who overdosed truly overdosed by smoking the contaminated substance or through use of an opioid separately was not determined.

On January 19, HIDTA issued an update discussing the review of the 39 cases as well as the subsequent DEA confirmation of the one sample as being positive for fentanyl.

The Poison Control Center continues to receive reports of people resuscitated with naloxone who claim to have only smoked marijuana.

I am on scene at a park in Hartford.  The bearded man in an army jacket sits at a chess table near the ice skating rink.  Two police officers stand next to him, arms crossed.  On the table is a marijuana pipe.  On the ground is a discarded 4 mg Narcan nasal injector.  The cops tell me he was found unresponsive, but woke up after he received a dose of Narcan.  He doesn’t want to go to the hospital, he says.  They want me to check him out.

What did you use, I ask?, adding “You are not in trouble.”

He says he only smoked marijuana. He points to the pipe.

“That isn’t your syringe and heron bag?” I point to the syringe on the ground by his boots and the empty heroin bag labeled “Party Time” that looks like it hasn’t been on the ground more than ten minutes.

He shakes his head.

I ask him if he wants to go the hospital.  He says no.

As most who have worked 911 know, it is not uncommon for people who are resuscitated with naloxone to deny any use of drug at all.  A review of October 2021 cases to SWORD, found 8% of all patients who received naloxone denied any drug use at all.

“But, dude, you were blue and not breathing.  We gave you naloxone and now you are talking to us.”

Connecticut legalized marijuana possession on July 1, 2021, which likely was a cause in the increase of “used marijuana only” reports.  It is understandable to me that someone would blame their symptoms on a legal drug as opposed to admitting using an illegal one, particularly if police are on scene.

It is instructive to compare these suspected marijuana reports with reports of people who claimed to use cocaine only and yet required naloxone.  SWORD gets regular reports of fentanyl-contaminated cocaine.  The three differences in comparing these reports are: 1) there is little dispute that inhaling or injecting fentanyl contaminated cocaine can cause you to overdose. 2) Seized cocaine supplies in Connecticut have routinely tested positive for the presence of fentanyl.  3) SWORD has received many reports of multiple overdoses where two, three and in one case, four people, all overdosed at the same scene, all with the same story.  They thought they were using cocaine and they went into respiratory arrest and required naloxone.  While there have been reports of suspected marijuana-contaminated fentanyl overdoses in geographic and time proximity (such as those in Plymouth), there have been no multiple overdoses reported at the same scene.

So where do I stand on this?  I think in most cases people hide their opioid use.  Just because someone after naloxone resuscitation says they only smoked marijuana does not mean their marijuana was laced or contaminated with fentanyl. Wait for confirmed lab testing and thorough review of an incident before making definitive statements. Understand the difference between suspected and confirmed. Media-Are you listening? I do think it is naïve to believe that some dealers haven’t tried spraying fentanyl on their marijuana.  But if this is happening, it seems unlikely to produce much of an enhanced opioid high.  I think cross contamination is also a possibility given that in Hartford many people who sell fentanyl also deal in marijuana.  I am not a scientist so it is hard for me to dispute people who site chemistry.  I have to give them credence.  And most compelling of all, there are just not enough credible reports of this happening to suggest fentanyl is being put in marijuana on any regular basis. Still I think the message must remain for all to be cautious when buying drugs from illicit dealers.  To end the overdose crisis, governments should consider safe supply initiatives.