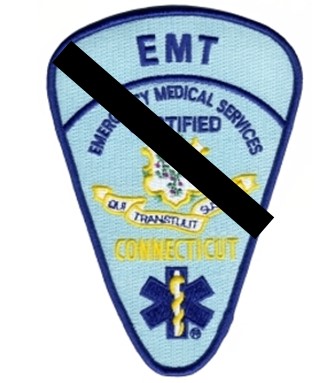 A number of winters ago, I responded for the “welfare check” in a local apartment building.  Carrying my gear I trudged through the snow to the door where the super met us and we walked through the bare lobby. He told us “his hands and feet are all blue.” By the way he said it, I knew he was talking about a body and not a person who needed help.  We walked up two stairwells to the third floor, where the super led us down a dim hallway and then opened the door of a one room apartment, and gestured for us to enter.  On the floor, there was a collapsed clothesless body, head faced into the wall.  The legs and arms were blue as the man said, and the rest of the body, a wazy white. There was vomit on the ground outside the open bathroom door. A small TV was turned on to the Andy Griffin show in black and white. The place smelled of cigarettes. There was uneaten food on the stove and the trash overflowed the bin.  In the corner of the room there was an open rabbit cage. I knew it was a rabbit cage because I saw the rabbit staring out from under the bed. There was rabbit poop on the floor along with scattered carrots and lettuce near the cage. I ran my six second strip of asystole, and marked the time.  After disconnecting the monitor wires, rolling them up and putting them in the side pouch, I did a quick survey of the room.  No drugs or alcohol.  I walked over to the dresser where there was open mail, bills, etc.  I was looking for the patient’s name.  That’s when I saw it.  Fuck.

Roger Smith (not real name).  I looked at the face turned to the wall.  It was blue and misshapen, but It was Roger.  While we were never regular partners, I worked many shifts with him an easy decade ago.  I liked working with him because he was strong and didn’t bitch about doing the job.  We talked about working out and girls and sports.  He was a Yankee fan.  I liked the Red Sox, but we didn’t hold it against each other.  I turned him onto Jamaican food and he got me onto these megavitamins I had to buy on the internet.  Bull kidneys, horse spleens, and lizard gizzards and a lot of other crazy ingredients.  I was never stronger than when I was taking them.

Roger developed mental illness, or if he had it all along, it became noticeable.   There were never any incidents at work that I was aware of, but it was serious enough in his life that he stopped working for us.  I heard he worked for a couple other services for awhile, but didn’t last. He was homeless for a while.  Sometimes I’d see him outside the hospital in a magnificently long winter coat.  He looked almost regal in it. A friend of mine said he let him in the hospital EMS room one day and security had to come and kick him out because he ate nearly all the sandwiches in the refrigerator.  It had been years since I’d seen him.

I stood over his body. “Good bye, Roger.  You were a good partner.”

I checked the papers for days afterwards to see if any obituary appeared.  None did.  I don’t think he had any family left.  Maybe an ex-girlfriend, but not one who maintained any contact.

When you die alone and without family, what becomes of you?  Are you buried in a potter’s field or are you cremated and your ashes stored in a paper bag in case some long lost relative ever shows up to claim you.  What happened to the rabbit? Donated to some animal shelter probably. And what about that long overcoat he wore in winter?  Was it burned or was it donated to a homeless shelter? Maybe that coat provide warmth against the cold and elements to some other poor soul who might be wearing it even now?

A couple months later in the spring when the snow was gone and the flowers were just starting to come up, I saw a nurse on one of the hospital floors who had also worked with Roger when she was an EMT and who I had told about his death, and we had wondered together if he still had family.  She handed me a copy of Roger’s obituary she had cut out of a small local paper that she had been keeping to show me.  It turned out Roger did still have family–an older sister,  two nieces, one of whom had young children who evidently adored him.  The article described Roger as a loving, caring man and mentioned how much he loved being an EMT.  There was a picture of him, looking just like he did when I worked with him. A good looking man with a confident smile.

Twenty years as an EMT.  He mattered in this world.