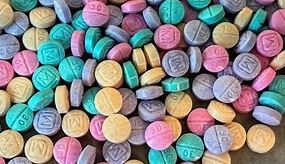 The DEA recently warned Americans about rainbow fentanyl, multicolored pills, powders and blocks containing fentanyl that the agency said were “a deliberate effort by drug traffickers to drive addiction amongst kids and young adults.”

We haven’t seen the rainbow pills in our area (Connecticut) although we have seen quite a lot of blue and purple fentanyl powders.  Most sources say the colors are strictly marketing/branding in pills pressed to look like oxycodone 30s.  The pills and powder when tested reveal they are not oxycodone, but fentanyl with adulterants.  Lab testing has shown there is no difference in strength of the various colored pills or powders, dispelling a theory that each color represents a different strength level.

The notion that the dealers are targeting young children has raised a lot of controversy.  There is no proof that the pills are targeting children. They have no tapes of cartel members drinking tequila and boasting of their plan to indoctrinate US preteens, no seized documents laying out elaborate plans to pass out colored fentanyl pills at Halloween to unsuspected trick or treaters in hopes of addicting them to opioids.  This seems to be just made up scare tactics by some bureaucrat at DEA as if the fentanyl epidemic weren’t scary enough.  Who says colored pills don’t appeal to adults?

Here in Hartford, most heroin/fentanyl is sold in wax folds, small envelopes that typically contain 0.1 gram of powder.  Of the powder only abou 1-2% is actually fentanyl, the rest is adulterants.  Because fentanyl doesn’t mix well, some bags can contain larger amounts of fentanyl, say 10 or 12% fentanyl, which is the reason many people overdose — they were unaware of the actual dose they received.  The wax folds in Hartford can be plain, or come in a stamped or branded bag used for marketing purposes to differentiate different dealer’s products.  Many years ago, we had a spate of heroin bags that were branded with cartoon characters — Hello Kitty, Kermit the Frog, and Bug Bunny. I found that very upsetting.

In Hartford’s Pope Park just down the street from the drug markets on Park Street, users inject or snort their opioids on park benches or in the bushes or in the park’s porta-potties, and the torn heroin bags are scattered across the ground. My concern at the time was less that dealers were trying to sell to kids than kids playing in the park would pick up discarded heroin bags and if they found some powder in the bottom of the bags with the cartoon stamped on it, they might think it was powdered candy.

I told one of my user friends to talk to the main guy selling bags behind the Bean Pot Cafe and tell him to stop selling bags with kiddie cartoons on them.  Tombstones, Devils, skulls were all okay, just not Hello Kitty.  Every time I asked her if she had delivered my message, she told me she had forgotten.  I am sure I had little to do with it but kid designs have almost disappeared entirely from Hartford, replaced almost entirely by skull designs as names like King of Death, Killing Season and The Reaper.

I have the same worry with some of the more brightly colored pills.  See a bright pink pill in the grass that looks like a sweet tart, a kid might put it in his mouth.  When I say kid, I am not talking about fourteen-year-olds.  I am talking about children five and under.

We have good data in Connecticut on the ages of people overdosing.  Based on EMS reported opioid overdoses to the state poison control center, over the last three years (June 2019-May 2022) children ages 0-5 were three times more likely to overdose on opioids than those aged 6-12.  The 0-5 year old’s almost all got into a relative’s supply.  Those aged 16-17 were twice as likely to overdose on opioids than those 13-15, who had the same number of overdoses as those 0-5.  People aged 17 and under represented only 0.7% of all reported opioid overdoses.  While overdoses in people 17 and under are increasing in recent years (attributed to increasing prevalence of counterfeit pills), it is still a very small number.

I think if the cartels were really trying to target these pills at kids, they wouldn’t use the die for oxycodone 30s.  They would use a sweet tart die.  Maybe I should send a message to the cartels.  Stop using the oxycodone 30 die.  Don’t even think about putting a sweet tart sign on the pills or any design that might appeal to kids.  Use a skull die. Beware Poison. Truth in Advertising.

And to the DEA, stop scaremongering designed to further vilify already irredeemable drug dealers and generate support for the failed war on drugs and your agency’s budget.  Put out honest data and analysis.  Work for constructive ways to keep poison out of the bodies of all Americans.  Support straight honest talk and safe supply initiatives.