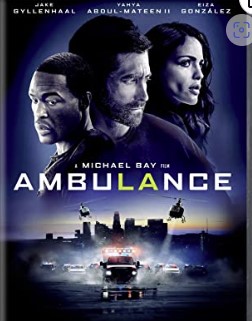 So I finally got to watch the Ambulance movie, now that it is available for free streaming on Amazon Prime.

I did not have high expectations for the thriller (having seen the trailer), but I am always interested in how EMS is portrayed by Hollywood.

The movie is simply one long chase scene as the police pursue an ambulance that has been hijacked by two bank robbers while still containing a paramedic trying to treat a policeman with a critical gunshot wound.  The robbers are two brothers–one a maniac career criminal, the other a decent ex-soldier who stumbles into being part of the robbery crew out of need to get money to pay for his wife’s much needed experimental surgery.

The EMS medicine is, of course, not very realistic, but we shouldn’t really expect it to be given the movie is a nonstop action thriller with crashes, explosions, flying bullets and death defying feats galore.  Of course, the movie also contains the obligatory emergency surgery done under extraordinary conditions (in an ambulance, often airbourne, bouncing through the streets and alleys at excessive speeds) to remove the bullet from the officer that has already caused him to go into cardiac arrest at least once.

A number of years ago I was a technical consultant on a FX TV pilot script where a paramedic is forced by a drug dealer to remove a bullet from one of his men’s shoulders.  I told the writer that typically, bullets are left in and the surgery under unsterile conditions would certainly do more harm than good. Taking a bullet out doesn’t undo the damage the bullet did going in. I suggested as a script fix, the paramedic tells the drug dealer just that — that taking the bullet out is only something done on TV and in the movies.  The drug dealer nods,  still pointing the gun at him and says :”Take it out anyway!”  The writer went for my fix, but unfortunately the network never made the pilot. (I still got paid – I thought it was a great script).

The movie’s moral focus is blurry.  The robbers have plenty of opportunity to do the right thing and let the medic and the wounded officer out, but they fear doing so will only lead to their own deaths.  So the chase continues and many others police officers are killed or maimed along the way before the ambulance wheels finally come to a stop,

I was going to give the move a full thumbs down, but then at the end, there was a moment there that I really liked.  The medic is being pressured by the police to not provide assistance to one of the robbers, who will likely die without her intervention.  She stands up against the men with the guns, and does what a good medic should — take care of the injured.  I was proud of her.

Bottom Line:  If you like chase movies with lots of thrills that require a great amount of suspension of disbelief, then this movie may work for you.  It also has Jake Gyllenhaal, a great actor, doing his usual thing, but no Oscars nominations for him in this role.

If you are an EMS person who insists on true-to-life content, you came to the wrong place.  Wait till the next time you punch the clock for your dose of EMS reality.