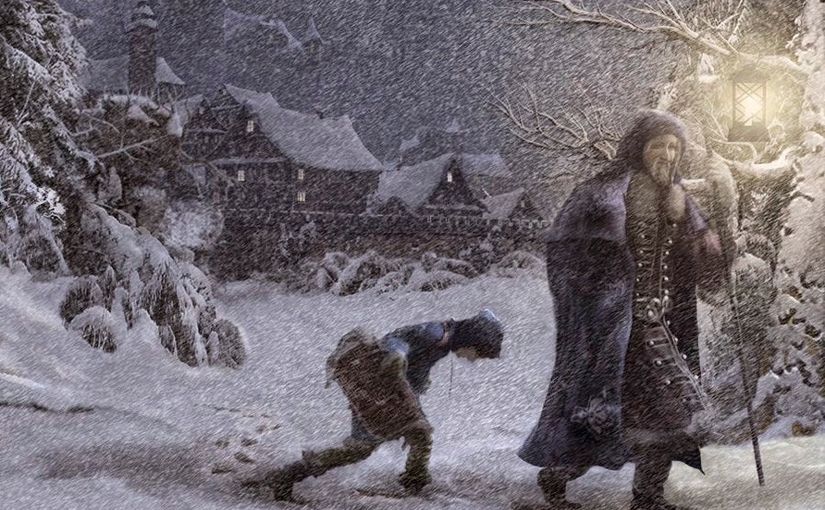 This is an old Christmas story I wrote years ago, reposted now.

***
Fifteen on the Scale

It’s Christmas eve. We get called to one of the local nursing homes for rib pain. The room number sounds familiar. As we wheel our stretcher through the lobby, “Good King Wencelous” plays through the speakers.

Gently shone the moon that night, thou the frost was cruel.
When a poor man came in sight, gathering winter’s fuel.

In the East Wing, the nurse hands me the paperwork. “Mr. Ryder says he needs more Percocets. He’s requesting transport.”Mr. Ryder is a tattooed biker, an emaciated COPDer with a long white beard. Almost sixty, he can’t weigh more than a hundred pounds. He sits in his wheel chair, in his Rebels motorcycle jacket, wearing an oxygen cannula.

“I’m in real bad pain,” he tells me in his whisper of a voice. “Fifteen on the scale.” He nods as if to say it is the truth.

“Well, we’ll check you out when we get you out in the ambulance,” I say.

It seems he fell a couple weeks ago and cracked a rib.

I have taken him to the hospital at least ten times over the years. The night medics have taken him more. Nearly every time it is self-dispatched. He agitates the nurses until they call his doctor who after several calls relents and tells the nurses to go ahead and call an ambulance just to get him to stop pestering them. He gets pneumonia a lot and complains of the chest pain. It is always “real bad,” he says. He goes to the hospital and gets sent back a couple hours later. He is rarely admitted, and in those cases it is usually for a COPD exacerbation.

I see Jimmy nearly every time we go into the nursing home. He is usually sitting out in his wheelchair in the main TV area. I say “Hey Jimmy! How’ya doing?” as I push the stretcher past going for someone else on the wing. He lights up and says, “Not too bad, hanging in there.”

That’s the jist of our relationship.

Today in the ambulance, I have an EMT student do vitals as we start toward the hospital.

She chit chats with him.

“You’ve got all your Christmas shopping done?” she asks.

“Yeah, I just bought stuff for myself,” he says. He tells her Dial-a-Ride took him to the Mall. His favorite store is Spensers where he gets a lot of novelty gag items.

“I buy presents for myself sometimes,” she says. “How about you?” she asks me.

“Well, unless you’re going to the drug store when you get off, you’re out of luck. Time’s run out.”

“I’m in good shape,” I say. I think to myself if I get out in time, I’ll probably make a quick stop at the liquor store where I’ll buy myself some Christmas beer — a case of Red Stripe. I always ask for a case of a specialty beer for Christmas. Last year it was Presidente from the Dominican. This year I want Red Stripe from Jamaica. My girlfriend was going to buy it for me, but she is still hung up at the hospital. I told her not to worry about it. I’d get it myself. There is a liquor store that doesn’t close till eight on my way home. I’ll drink the beer slowly over the course of the year, taking one out every now and then and drinking it slow. I’ll buy other beer during the year, but this case — my Christmas beer — I’ll stretch out.

The patient looks up at the EMT student and says, “This guy over here, me and him go back a long way.”

“He’s taken care of you before?” she says.

“Yeah.” He nods at me and then says, “He’s probably one of my best friends in the world.”

I melt a little inside at his words. It makes me terribly sad. I think of his biker buddies — Hoss and Snake and Big Steve — and wonder if they are enjoying their winter’s fuel at the Iron Hog tonight. Or maybe they are already in the cold ground or solitary in nursing homes themselves.

Jimmy looks up at me now, his eyes locking on mine. “I’m in real bad pain,” he whispers urgently. “Fifteen on the scale.”