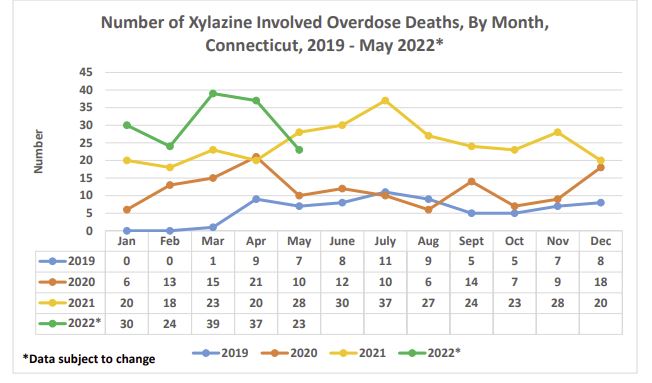 “You need to get that checked out,” I said.

“I’m not going to the hospital. They treat me like shit there.”

“I’m sorry they do, but that’s not getting better.” The woman has a nasty necrotic ulceration in her AC that has eaten away the skin and some of the tissue underneath. It is black and yellow and red and brown and it smells.

“Can you give me some ointment, at least.”

I just shake my head. You need a doctor for that. We can take you to the hospital right now if you want to go.”

I feel bad that I couldn’t help her. I feel worse for what is happening to her and others like her.

If you are noticing increasing nasty skin abscesses and ulcerations on some of your patients who use IV drugs, it is likely because of xylazine.

Xylazine is an animal tranquilizer that was originally designed as an analgesic for people, but was abandoned due to tests that showed it caused severe hypotension and depressed mental status.

It is not an opioid and is not currently regulated.  Drug dealers buy it and add it to their heroin/fentanyl mixture.  Because fentanyl doesn’t last but 3-4 hours, adding xylazine adds “legs” to the drug, meaning the patient’s high lasts longer.  Unfortunately, many don’t like the high provided by xylazine.  They feel drugged, zombieish.  The concoction was first noticed in Puerto Rico, and later found a strong foothold in Philadelphia where it is sold as “Tranq-dope.”  Here in Connecticut, it seems to just be used as an additive to fentanyl and is not typically requested or advertised, at least not by the users I have talked to.  It is just an unfortunate additive that comes when you buy your dope.  The other unfortunate issue is it can cause severe necrosis when injected.  This is attributed to how it reduces oxygen uptake in the skin, and because it is an analgesic, users often inject right back into the painful ulceration to provide temporary relief, which only makes the ulceration worse.

So these are just drug users being affected?  Who cares?  That’s what some say.  To me, it is so sad what is going on.  People whose lives were sent on tragic and unexpected trajectories because of an injury or illness or through simple experimentation, lose nearly everything and end up on the street where they are are victimized again, forced to buy impure drugs, whose dose they can’t calculate and that containin crap like xylazine that only adds to their misery and may contribute to their deaths.

We need to talk about safe supply,