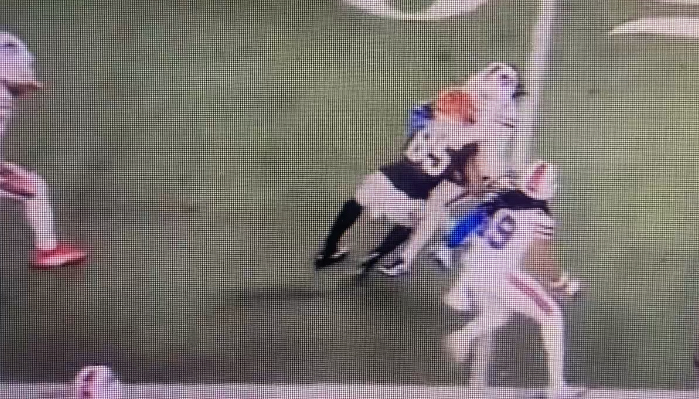 The on-field cardiac arrest of 24-year-old Buffalo Bills safety Damar Hamlin on Monday Night Football captured the attention of our sports-watching nation.  The  TV producers were hailed for their decision not to continually reshow the clip or show closeups of the rescue on the field.

I understand medical privacy rights and as a working paramedic for over 30 years, I do not like the increasing practice of bystanders live streaming emergency scenes.  That said I found the internet clips of Hamlin’s collapse more instructive than intrusive.  I teach a class on resuscitation, which includes a series of videos of people suffering cardiac arrest.  It is helpful both for professional rescuers and the lay public to see what sudden cardiac arrest looks like and to be able to respond quickly.

Rapid CPR is necessary to pump blood-carrying oxygen to a collapsed patient’s brain and other critical organs to prevent death or permanent damage.  Defibrillation — a calibrated electrical shock to stun a fibrillating heart back into a functional rhythm– is also critically time sensitive.  Hamlin received CPR within a minute and defibrillation soon after.  His heart was restarted on the field.

When the sports channel ESPN hosts its annual ESPYs awards, the play of the year should not be an overtime touchdown, playoff home run or buzzer-beating 3-point shot.  It should be Hamlin’s resuscitation.  If the TV channel cannot show the actual clips, a recreation, including the moment the medical team restored Hamlin’s pulse, would have lasting educational value to the country, driving home the importance of knowing CPR.

A key point for professional rescuers and lay people — the rescuers treated Hamlin on the field.  There was no attempt to move him so the game could continue.  Moving a patient in cardiac arrest is harmful.  Years ago, paramedics would quickly insert a breathing tube, give one round of potential heart-starting medication, then load a patient into an ambulance and continue CPR racing lights and sirens to the hospital.  This was not an effective way to provide good CPR.  Today, we treat patients in cardiac arrest where they have collapsed.  Emphasis is on high-performance CPR of the right depth, rate and force so every compression counts.  Emergency crews are trained in pit-crew CPR where every member plays an assigned role.  I often have to explain to bystanders who wonder why we are not immediately taking the patient to the hospital that if we don’t get pulses back on scene, the outcome at the hospital will be grim.

As the EMS coordinator at UCONN John Dempsey Hospital, I follow cardiac arrest patients from the prehospital scene through to hospital discharge. People who receive immediate public CPR and rapid defibrillation, and who regain their pulses in the field, do well.  It was not surprising Hamlin’s life was saved.

What occurred on Monday night football happens every day in Connecticut communities. It happens in offices, in factories, in stores, on pickleball courts, on park grounds, in airports and casinos, on sidewalks, and in people’s homes. In 2022, seven members of our small Farmington Valley area community who suffered cardiac arrest, including Lawrence Friel, a man highlighted in a recent Hartford Courant story, were resuscitated by first responders, often with the aid of lay people providing the first CPR. All seven later walked out of the hospital into the grateful arms of their family members. True cardiac arrest saves.

(CPR saved Buffalo Bills safety Damar Hamlin and this Avon man. Now his mission is to have everyone learn the life-saving procedure)

According to 2020 data from the Cardiac Arrest Registry to Enhance Survival (CARES) in Connecticut bystanders provide the first CPR in 27.4% of cardiac arrests — a number which unfortunately is below the national average of 40.7%.  I hope, and future studies may show, that the legacy of Hamlin’s cardiac arrest will represent a demarcation line in our country’s battle against sudden cardiac arrest, a date that spurs a surge in Americans committing to learn CPR and put their knowledge into action as Jill Irwin did.

Let’s not stop with CPR.  People should learn the signs and symptoms of an opioid overdose and how to administer lifesaving naloxone.  Communities are also teaching people to recognize arterial bleeding and use tourniquets as part of the “Stop the Bleed Campaign.” You don’t have to be a professional rescuer to save a life and be a hero.

On a clear night, you can look down on the earth and see the scattered red lights of ambulances racing to save lives, protecting our communities.  Add to the ambulances, the citizens who know CPR and light them up like fireflies, and you can see the true hearts of Connecticut, illuminating our state with hope and love for all.